🌧 Due to tomorrow’s forecast Granger Smith ft. Earl Dibbles Jr. will be moving to our exhibit hall. We continue to maintain minimum of 6ft between groups and follow COVID-19 safety measures. Everything that was provided at our outdoor Watergarden Park venue will still be implemented in our indoor venue such as; ✅contactless concessions, ✅ sanitized restrooms, ✅tables & chairs. 🥳 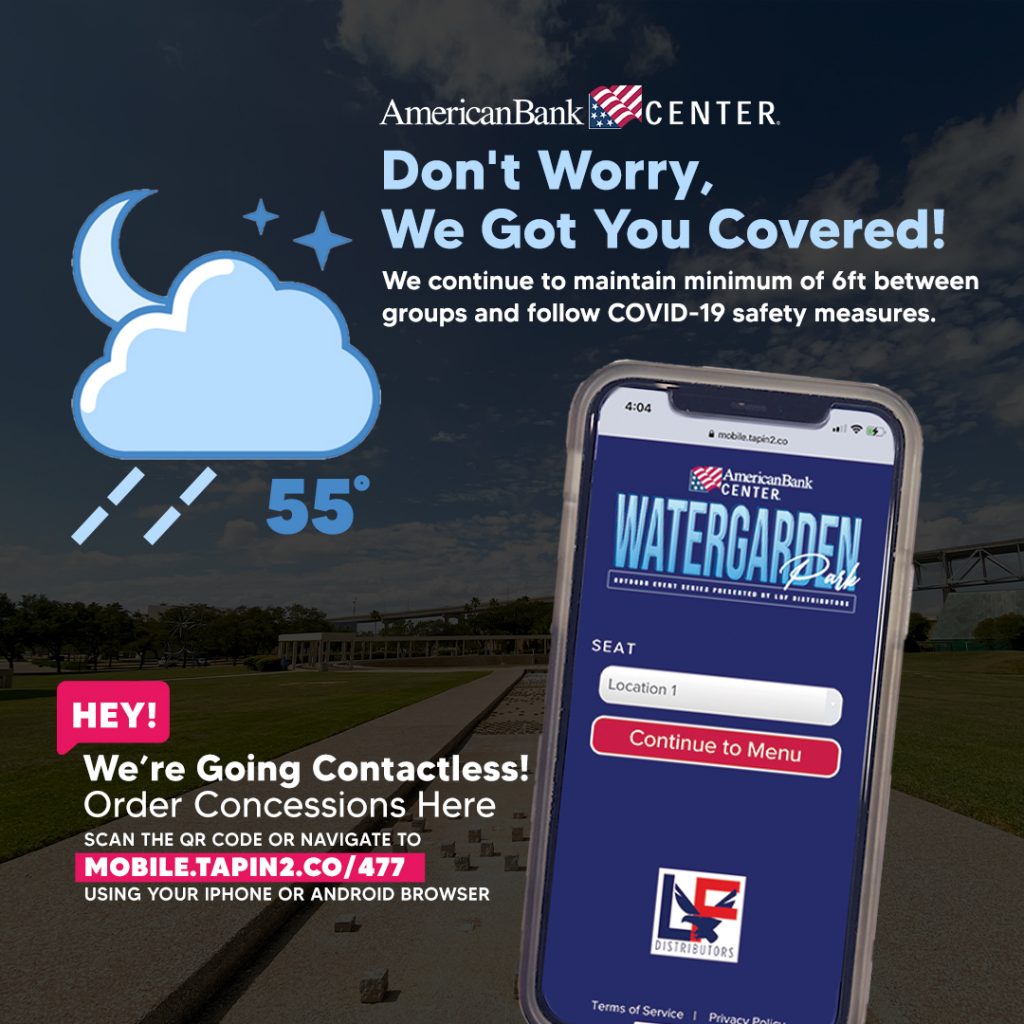 Tickets ON SALE NOW!  Purchase tickets with the link below or at American Bank Center Arena box office.

Tickets are sold as one group ticket. Must purchase tickets in 4 or 6 pack for a Pod or VIP table.

You’ve Got Questions, We have Answers.

How do Pod Concerts Work?
There are 250 pods for sale for each concert. Pods consist of a 7′ x 7′ defined space. You are purchasing the entire Pod for up to 6 people. It is not required to have 6 people attend but have access to all 6 seats. No other patrons will be included in your pod. All Pods will be at least 6 feet a part to ensure social distancing.

Why Pod Concerts?
We think the time is right to start hosting live events once again with social distancing elements the top priority. This concept and location creates a unique setting for the performers and patrons.

Where are the events taking place?
In the Watergarden green space between the Selena Auditorium and Art Museum.

What is included with the Pod ticket price?
When purchasing the Pod, you get access to You + 5 guests. 6 seats in each Pod. Parking is included in ticket price. Pod allows you to view the show in your own person viewing area.

What is included with a VIP ticket price?

The first 3 rows are VIP tables, you get access to You + 5 guests. 6 seats to your VIP table. You will have access to pre-order your Concessions items direct from your seat. Personal cooler to keep your drinks cold. Pre-order your concessions Menu

What social distancing elements are being considered?
We know how essential it is to maintain social distancing right now so we’ve made sure there will lots of space for all as well as coordinated traffic flow plan.

Are outside food and beverages allowed?
No, but our phone app will allow you to order concessions and pick up through an express pick up lane.

Yes. Any bags larger than a clutch bag will need to be clear. Bags no larger than 12″x12″x6″ will be permitted at this event. We do allow each member of the party to bring in a large clear ziploc bag, including children, of their belongings. Guests who have bags larger than this size will be asked to return them to their vehicles. All bags will also be searched for prohibited items at entry before walking through the metal detectors.

We have considered the following:

This event is set up in accordance with safe social distancing rules. 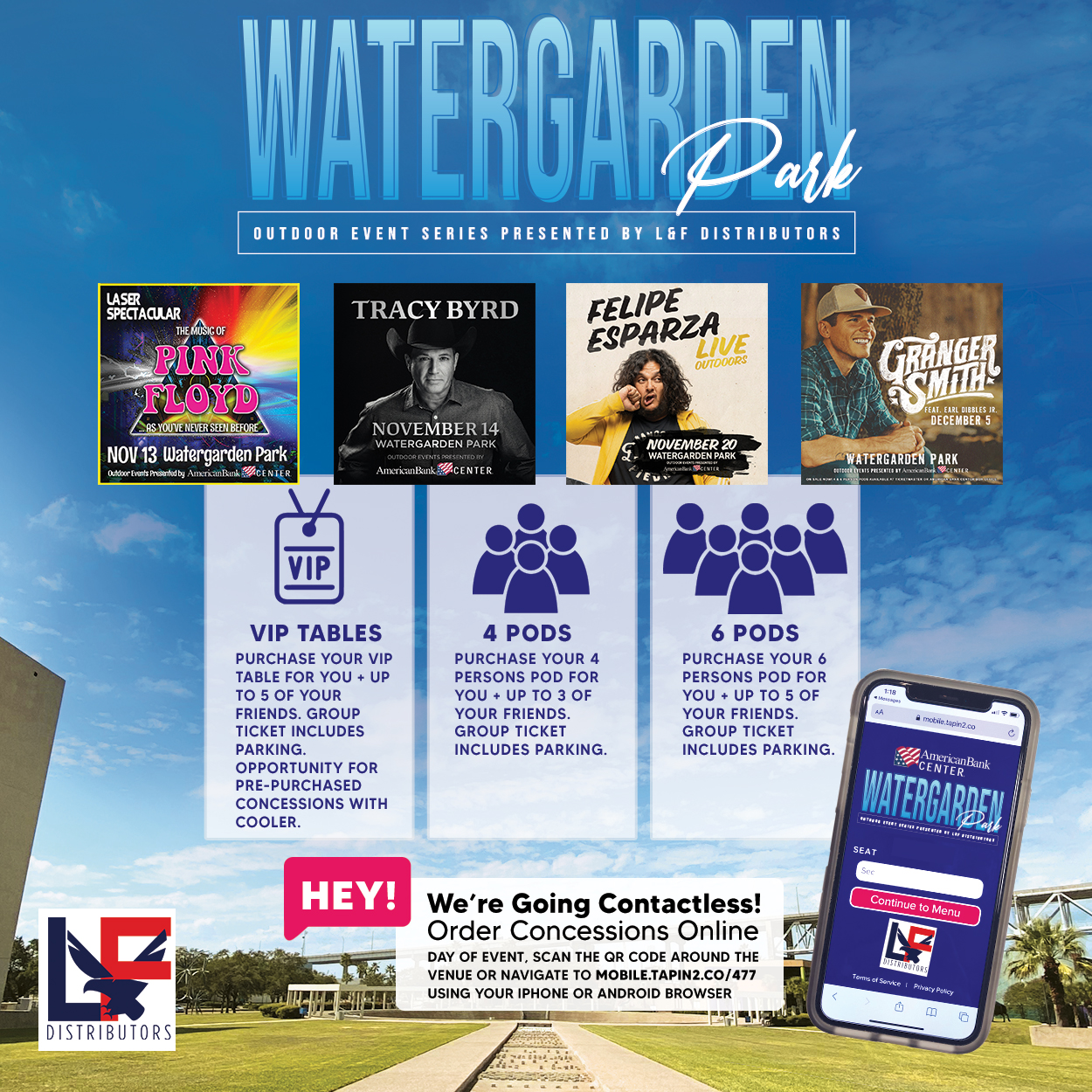 “You don’t always know what’s around the next curve, but you take that road anyway.  That’s what makes it beautiful.” – Granger Smith on the path he’s taking now

That’s what country music has done for Smith. And that’s the true measure of a bona fide artist: when you can share a little bit of yourself with every story you tell and every picture you paint.

After the kind of year Smith had — we all had — he decided to let his music do the healing. Not just for himself, but for anyone who needs to hear songs that let them know they’re not alone on whatever road they’re taking.

And it’s been a long time coming.

This new batch of music from the born-and-bred Texan initially started back in early 2019. Smith was writing and creating and prepping for his 10th studio album, when all those plans abruptly came to a halt.

“The vision for this music collection was just starting to come together. I had about six songs ready to record and had booked a Nashville studio for June 5, 2019. And then we lost Riv the night of June 4,” Smith recalls of the tragic night he and his wife Amber lost their 3-year-old son River in a drowning accident at their Texas home. “Everything stopped. The album wasn’t just on hold. It didn’t even cross my mind.”

But after several months of mourning, he was visiting his parents, sitting on their front porch just outside of Waco, and listening to the song he’d written earlier that year with Chris DeStefano, Bradley Rempel and Jon Nite. “That’s Why I Love Dirt Roads” was one of the songs he’d been planning to record on June 5.

“It started hitting me in a different way. It had taken on new meaning,” he says. So he sat down to rework the song’s bridge to reflect that sometimes dirt roads are beat up and broken, scattered and tossed in the breeze. But no matter their scars, it doesn’t change what they are. That sounds a little like me.

His team warned him against any kind of re-entry into the music world. But Smith was insistent that if the song helped him cope, it could do the same for others.

“That was what I wanted people to hear me say. So, when we started playing shows again, I was using that song to recalibrate my life,” he says. “You can relate life to a dirt road in a lot of ways: sometimes it’s beat up, broken, scattered and washed out, and you don’t always know what’s around the next curve, but you take that road anyway. That’s what makes it beautiful.”

That one song was enough to get Smith ready to make music again. And just as he was taking stock of the songs, he’d prepped for that June session after one last stop on his tour, he came back home. And so, did COVID-19.

At first, the quarantine’s arrival seemed like a blessing for Smith. He sat down with the unexpected downtime and penned “Heroes” and “I Kill Spiders.” That’s when, Smith says, the album started taking a turn.

“I’ve never been the artist who creates a theme before we start. I’m the guy where the theme starts happening halfway through the process. When you start narrowing down the list, you see that you’re creating a story with the songs. So, if you listen all the way down, you’re not gonna get stuck in one emotion,” he says. “It’s gonna take you different places.”

Two of the songs Smith ultimately recorded were brand new to him. They’re songs about fatherhood. In his previous nine albums, he’d never addressed his own family in his music. “There was never an entire song about my father-son or father-daughter relationships,” he says of “I Kill Spiders” and another soon to be announced song.

Smith, his wife, their son Lincoln and their daughter London have started revealing more of themselves in their YouTube series The Smiths. Song wise, exposing your family is something Smith says only happens in country. “It’s what separates country from rock and pop. We all overlap on love songs, loss songs, mad songs and happy songs.  But where we don’t intersect with those other genres is family.”

Keeping the stories and the lyrics genuine meant the music would have to follow that lead. “So, there are no synth loops here. All the instruments are played by human hands,” he says.

And the title track is notable for one simple reason: simplicity. “After Riv, I really wanted to simplify a lot of things. We moved twice: first to get to a landing spot, and then second to a piece of land where we’re building a new house. So, until then, we’re literally living in an RV parked in the barn on the property. ‘Country Things’ speaks to that simplicity of boiling everything down to the basics of what we need not what we want. We are so much closer now: to the elements, to nature, and to each other.” That’s how the banjo-heavy track led the way for this next chapter in Smith’s career.

Smith made the decision to release his new songs in two parts because of the current state of the world. It’s impossible to imagine that someone could digest 16 songs in one sitting, and truly feel the complete ride he’s trying to give them. The 16 songs, once you do hear them in their entirety, have Smith all over the map. But it is, and always will be, a country map. And rest assured, Earl Dibbles Jr. is along for the ride on three songs.

Earl brings Smith something of a creative release, and he compares Earl songs to the dessert you crave after a good meal. “Those songs seem to happen amidst the writing of all the other songs but are always just on the back burner. They never take up real estate in my mind. They never overshadow the other music,” Smith says of leaving room for a little Earl. “I don’t want people to take my albums too seriously. I love that there can be a light-hearted stroke. It took time for me to realize that I could write an impactful, heartfelt, moving song that gives you goosebumps. But what equally affects people is a genuine smile from an Earl song.”

Another part of Smith’s life that forever tethers him to his fans is the Yee Yee brand he started with his brothers Tyler and Parker. It is not merely Smith merchandise. It has a life of its own. “It is no longer a reflection of the music,” Smith says, “now the music is kind of the soundtrack to those Yee Yee people. And that’s a huge blessing.”

With the new music, the YouTube series, the Yee Yee brand, and the dependability of Earl Dibbles Jr., Smith says it all works together to reveal the truth. “We are normal, very vulnerable humans. Now when I meet people, they feel like they really know me. They genuinely feel closer to me and more comfortable around me,” he says. And that is the proof that there’s a little bit of Granger Smith in everything Granger Smith does.